Haneen Zoabi candidacy was barred for being on boat stormed by commandos, but supreme court rules ban unconstitutional 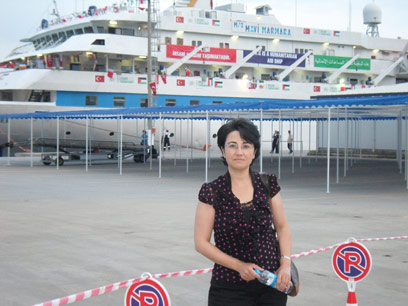 "An Israeli-Arab politician who took part in a flotilla of ships attempting to breach the blockade of Gaza in 2010 will be able to compete in the general election in three weeks, after the supreme court unanimously overturned a ban on her candidacy.

A panel of nine judges overruled a decision by the central elections committee to disqualify Haneen Zoabi from seeking re-election as a member of the Israeli parliament. The committee's decision was based on her participation in the flotilla.

Following the supreme court's ruling on Sunday, Zoabi said the attempt to bar her from the election was "the result of political and personal persecution against me, against my party and against the Arab public as a whole".
But, she added, "this ruling does little to erase the threats, delegitimisation and physical as well as verbal abuse that I have endured … over the past three years."......."
Posted by Tony at 7:36 AM