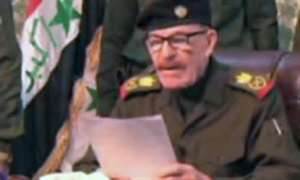 
"The people of Iraq and all its nationalist and Islamic forces support you until the realization of your just demands for the fall of the Safavid-Persian alliance," said Douri, addressing the protesters in footage broadcast on Alarabiya television.....


The authenticity of the video could not be verified. Douri said he was speaking from the Iraqi province of Babil......"