With no sign of the west relaxing its ban on arming opposition forces, rebels are forced to focus on a gradual war of attrition 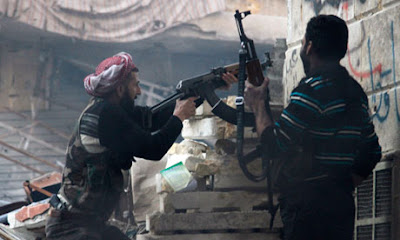 "Despite widespread pledges of support from western and Arab states, the main Syrian opposition coalition says it has still not seen any significant increase in funding or arms supplies.

Members of the National Coalition for Syrian Revolutionary and Opposition Forces, formed in November, say that there is still no sign of western capitals relaxing their ban on delivering weapons to the rebels and that even Gulf Arab governments, which helped arm opposition groups last year, are supplying less with every passing week.

"The supplies are drying up. It is still Syrian expats – individuals - who are providing the funding by and large," said a Syrian businessman who has helped to fund the opposition since the uprising began 22 months ago.
As a result, he said, the fragmented rebel forces have changed strategy, giving up hopes of a sweep through the country, and focusing instead on a gradual war of attrition: besieging isolated government military bases to stop the regime using planes and helicopters against them and ultimately to capture weapons, to compensate for the meagre supplies from abroad......

He added: "I see a very dark period ahead of us, with a total breakdown like Iraq in 2006, with sectarianism on a scale we have not yet seen in Syria."

Mustafa Alani, the director of the national security and terrorism studies department at the Gulf Research Centre said: "The people fighting on the streets are not controlled by people outside. They feel they can topple the regime without any help. They feel they are able to self-finance and self-arm and they can survive.
"Their focus has shifted. Their strategy is not to try to hold villages and towns so much, but to concentrate on air bases, to stop the aircraft flying and to build up pressure in Damascus. That is where the war will be decided.""
Posted by Tony at 10:29 AM