Even in Assad's coastal retreat, the war has come and the bombs are dropping

Bands of rebels, pursued by Syrian air power, are consolidating their position in mountains above the wealthy playground of Latakia – which may become the regime's last redoubt


"Local people describe it as a distant growl, an ever-present rumble, just to the north. A reminder that war is now at their doorstep.

It has been this way for two months in Latakia. The port city had managed to ride out Syria's civil war, seemingly content in the knowledge that whatever was happening in Hama to the south-east, or Idlib a little further north, an army stood between its gates and its foes. Not any more.
The spectre of war is now a reality here in the staunch core of the regime heartland, as much as it is in the rebellious and ravaged Sunni cities to the east. The shells that crunch most hours into the nearby countryside have not yet arrived. But the fear that pervades the communities on the fringes of Latakia is now spreading around the city known throughout the country as the government's stronghold, and possibly its last redoubt.
"We are afraid, very, very afraid," said Loubna, a final-year university student and resident of the city. "For so long the regime has been saying we will be safe here. That nothing will happen to us. Nothing can happen to us. But people are leaving, people are dying. Death is so near."........ 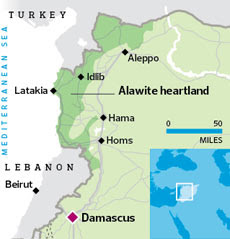 "The wolves are at the door," said an Alawite refugee in the Turkish border town of Reyhanli. "Even Qardaha is not safe any more."
Qardaha is the ancestral home of the Assad family. It is where the late dictator and architect of Syria's uncompromising social and military doctrine, Hafez al-Assad, is buried, in an immaculately kept shrine maintained by an honour guard. It was never supposed to be under threat of attack.
But 12km to the north, in the mountains of Jebel al-Krud, a giant plateau that soars above Latakia and Tartous to the south, rebel groups now have Qardaha in their sites......".