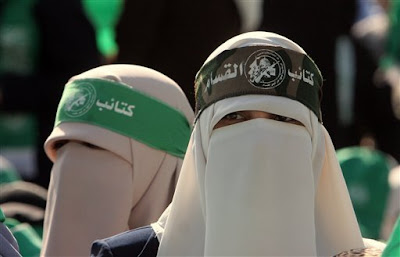 The Approved Women's Fashion, According to Hamas.

"The religious endowments department of the Hamas-led government in the Central Gaza governorate has launched a campaign to " entrench good values and virtue" that targets Western attire, including low-waist and skinny pants, tight tunics and Western haircuts.

A Central Gaza governorate official, Adel al-Hoor, said the campaign will begin with awareness raising and will not end at a specific date.

Part of the campaign is to have all preachers raise awareness on proper clothing during Friday sermons, he said, adding that workshops are being held and interactive Facebook pages created for the same purpose......"
Posted by Tony at 7:17 AM