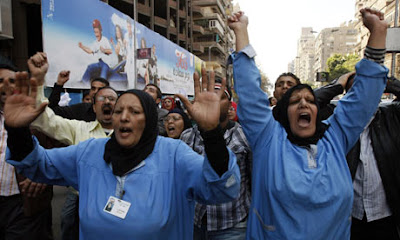 "CAIRO, Jan 24 2013 (IPS) - Workers played a pivotal role in the mass uprising that led to former Egyptian president Hosni Mubarak’s downfall. Now, two years on, the same labour movement that helped topple the Arab dictator is locked in a stalemate with the government and employers over long-denied labour rights and untenable working conditions.

In recent months, thousands of disenfranchised workers across Egypt have taken collective action to secure better wages and working conditions, paralysing sectors of an economy still recovering from the 2011 uprising. The country’s new Islamist-led government has promised to resolve labour disputes quickly and equitably, but faces formidable challenges as it grapples with restive workers, unyielding employers, and depleted state coffers.

The Muslim Brotherhood, the conservative Islamic movement that dominated last year’s parliamentary and presidential polls, ran on a platform that emphasised social justice. Yet the once-outlawed group has a poor track record on worker rights, and a history of anti-union activities.


“We had a revolution but the only change is from (Mubarak’s) National Democratic Party to the Muslim Brotherhood,” says labour activist Kareem El-Beheiry. “The Brotherhood has never done anything for the labour movement, and never supported workers or independent unions.”....."