Egypt now needs truth, reconciliation and no rush to the ballot box 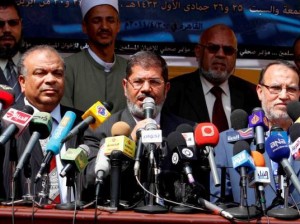 "......Worse still for the Muslim Brotherhood, the jihadi rhetoric and the violence have led to growing calls that the organisation be designated a terrorist outfit, outlawed and disbanded.
Given this language, it's hard to imagine how can Egypt re-integrate the MB into the political process – arguably one of the most difficult challenges facing the country right now.
The police have rounded up many of its leaders on charges of incitement to violence. Others are on the run. The MB has declined offers to be included in the new interim administration.
The ripples of Egypt's second upheaval are still being played out and their full impact may not be clear for some time. But one of its most important consequences has been throwing into sharp focus the question of the compatibility of Islamism and democratic values.
It has become pretty obvious to everyone that democracy for the MB means nothing more than the ballot box and winner-takes-all. That is primarily why they have failed to build bridges with the opposition and create consensus – the only way to run a divided society like Egypt.
Now, the MB has a choice to make: either do some soul-searching or continue to blame it all on foreign conspiracies and the "crusader west". The former could pave the way for compromise and power-sharing. The latter would consign it to a slow and painful death.
The MB has perfected the art of double-speak: the language of democracy and human rights to its western interlocutors, but that of jihad and xenophobia to fire up its poor masses. That too has to change if it wants people to believe its avowal to respect democratic values, and I don't see that happening any time soon.
No less important for the MB is the need to revise its founding myth (its core ideas have remained untouched since its founder Hassan Al Banna more than 80 years ago) that sharia is the panacea to the ills of society. This fallacy has been exposed and is why people quickly became disillusioned with Morsi. The poor and hungry cannot eat sharia, neither can holy books or piety alone create jobs or grow the economy. Egyptians revolted against Mubarak in January 2011 not because of a supposedly lost Muslim identity, but to demand freedom, dignity and social justice......"
Posted by Tony at 8:02 AM