Right on schedule, this phase is proceeding according to USraeli plans. The FSA is now expected to play the role of the US-created "Sahwa" forces in Iraq.

All of the USraeli objectives are being accomplished in Syria: Aggregation of "militant" Muslim fighters in one place for easy destruction; the conversion of the FSA to a "Sahwa" force; drawing in Hizbullah to scatter its forces and to weaken it; spread and intensification of sectarianism; Syrians killing each other and finally the destruction of the Syrian state. 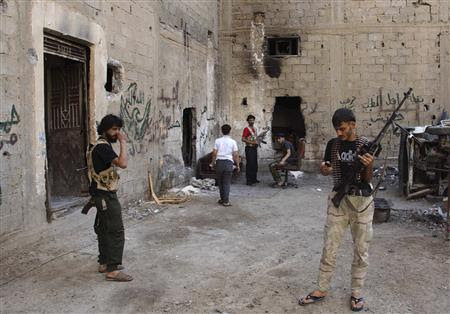 "(Reuters) - The assassination of a top Free Syrian Army commander by militants linked to al Qaeda is tantamount to a declaration of war, FSA rebels on Friday, opening a new front between Western-backed forces and Islamists in Syria's civil war.
The announcement is the latest sign of disarray in the armed opposition to Syrian President Bashar al-Assad, who has regained the upper hand more than two years into an insurgency that grew out of Arab Spring-inspired pro-democracy protests.
It follows growing rivalries between the FSA and the Islamists, who have sometimes joined forces on the battlefield, and coincides with attempts by the Western and Arab-backed FSA to allay fears any U.S.-supplied arms might reach al Qaeda.
Members of the Islamic State of Iraq and the Levant, a hardline Islamist group, killed Kamal Hamami of the FSA Supreme Military Council on Thursday. Also known by his nom de guerre, Abu Bassir al-Ladkani, he is one of its top 30 figures.
Rebel commanders pledged to retaliate.
"We are going to wipe the floor with them. We will not let them get away with it because they want to target us," a senior rebel commander said on condition of anonymity......."
Posted by Tony at 3:55 AM