UPDATE 2: 42 die in clashes between Egypt army and pro-Morsi protesters 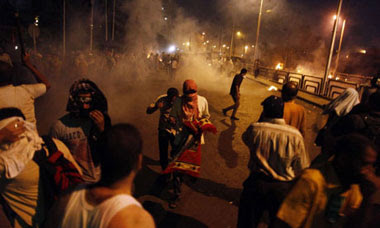 The Egyptian army said one officer died and 40 soldiers were injured, including seven in critical condition.
Conflicting reports have emerged on how the clashes started on the 5th day of a Muslim Brotherhood spearheaded sit-in at the army facility to demand the return of deposed President Mohamed Morsi.
In an official statement published by Al-Ahram Arabic news website, the army said an "armed terrorist group" attempted to break into the Republican Guard headquarters in the early hours of Monday and "attacked security forces."

The Muslim Brotherhood's FJP, however, issued an official statement saying "peaceful protesters were performing the Fajjr (dawn) prayers," the army "heavily fired tear gas and gunshots on them without any consideration for the sanctity of prayers or life."
"This is also a violation against people's right for a peaceful protest," it added.
Large numbers of women and young people sought shelter in a nearby mosque, the Brotherhood statement said, but the security forces "besieged the mosque and arrested anyone who came out of it."
“The Egyptian people woke up on 8 July 2013 to the sound of bullets being fired at peaceful protesters in front of the Republican Guard HQ while they were performing their dawn prayers, turning it into a horrible massacre.”
“This has never happened before in the history of the Egyptian army,” the FJP statement added.
“Perhaps there are still some wise men in the army who can put a stop to this behavior which is abnormal to the Egyptian army.”
The army, however, said it had arrested at least 200 people who had “large quantities of firearms, ammunition and Molotov cocktails.”
It also said that it had reopened Salah Salem Road which had been blocked by pro-Morsi protesters.
President Morsi was deposed by Egypt's Armed Forces on Wednesday following nationwide protests calling for his ouster. Judge Adly Mansour, the head of the High Constitutional Court, was sworn in as the country's interim president on Thursday.
Morsi's removal sparked anger among his supporters, mainly Islamists, spearheaded by the Muslim Brotherhood.
The National Alliance for Supporting Legitimacy, a pro-Morsi group formed to back his right to complete his term of office, continues its sit-in at Rabaa Al-Adawiya Mosque in Cairo’s Nasr City district.
Other pro-Morsi groups have been protesting elsewhere, most notable at Nahdet Misr Square in Giza.

Shortly after the deadly clashes, Strong Egypt Party leader Abdel-Moneim Abul-Fotouh, a critic of former President Morsi, called on interim president Adly Mansour to step down after 42 people were killed in clashes between the army and pro-Morsi protesters at the Republican Guard headquarters on Monday.
Abul-Fotouh, who resigned from the Muslim Brotherhood shortly after the 2011 uprising, told Al Jazeera that the incident was "a horrible crime against humanity and all Egyptians."
Also on Monday, the Salafist Nour Party, which had initially agreed on Wednesday to the ouster of President Mohamed Morsi, announced that it "will withdraw from the political process" in response to the incident.
"We wanted to avoid bloodshed, but now blood has been spilled. So now we want to announce that we will end all negotiations with the new authorities," Nour added."