In Egypt, Barack Obama's approach is like that of a spread better 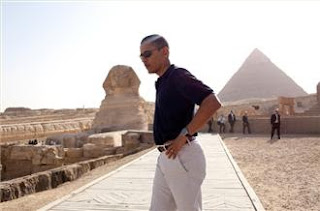 ".....Now Muslim Brotherhood supporters are being killed, arrested or muzzled; the former president is detained; and the army has issued an arrest warrant for the Brotherhood's spiritual leader. The US has cautioned the army about respecting the rights of Morsi supporters – but it won't side more strongly with them because it isn't clear, yet, if they are needed to maintain US concerns: the army and opposition may be able to forge ahead without the Brotherhood; they may not. For the US, it's best to stay vague. This is why, preposterously, America is able to confirm plans to send four shiny F-16 fighter jets to Egyptian military on Thursday, while still talking democracy and inclusion for Egypt's transitional process.

None of this will be of any great surprise to Egyptians who, as in other parts of the Arab and Muslim world, are used to this duplicity and double standards (Palestinians, for instance, know this script by heart). All that fine talk in Cairo in 2009 may have hit all our happy notes, but now in Cairo and across the Middle East, when the US administration reiterates its hopes for strong democracy in the region, it is beyond implausible – it is insulting."
Posted by Tony at 12:47 PM