Treatment of Palestinians is apartheid by any other name 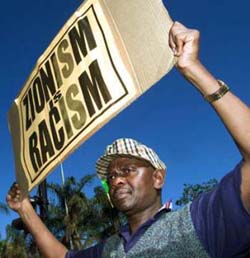 ".........The Prawer plan, which passed its first reading in parliament last month, will force 40,000 Bedouin off their land - the largest expulsions inside Israel for decades. Unlike Jewish citizens, they will have no say over where they live; they will be forcibly assigned to a township.

For the first time, Israeli citizens - the Bedouin - are to be deprived of any recourse to the courts as they are harried from their homes. Instead Israel will resort to administrative procedures more familiar from the occupied territories.

The policy is clear: Palestinians on both sides of the Green Line are to be treated like sheep, fenced into ever-smaller areas, while Jews will have unrestrained access to a Greater Israel envisioned by Mr Netanyahu. The international community has long criticised Israel for the "discrimination" its Palestinian citizens face and for the "oppression" of Palestinians under occupation. This terminology needs overhauling too, say the human rights lawyers.

A system that treats one ethnic group as less human than another already has a legal name: it is called apartheid."
Posted by Tony at 8:49 AM