Is the Egyptian Revolution Dead? 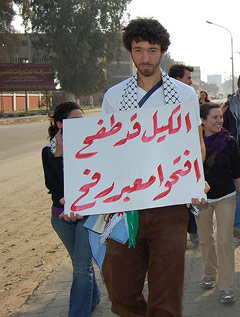 ".......The fear is that the forces that maintain hegemony over our society are using every means possible to prevent the further fruition of our revolution. This includes a dirty game of exploiting these recent events by purposefully deepening divisions within Egyptian society to make their rule unavoidable, more violent and even less accountable to the population at large. Since 30 June this has meant an unending stream of bloodshed amongst Brotherhood supporters and civilians either protesting them or caught in the crossfire or within sectarian battles. We are caught in a situation where a population is being held hostage and their death is being incited and capitalized on by almost all political elites vying for power: the military generals, the Brotherhood and the liberals.
Today we are still in the midst of the January 25 Revolution. We face a serious threat of its co-optation but until now the power still lies with the people. In order to fight on we must both remember the past as well as see our immediate situation in light of the global power constellation.
We are not alone.
Despite the different contexts across Brazil, Turkey, and Chile, as in Greece, Spain, Portugal, and the United States, people are taking to the street to stand in the way of the rule of local elites by the logic of the longevity of their power and the increase of a minority’s wealth. Seeing all these revolutionary moments within one frame means that with or without democracy, with or without elections, popular rule is moving to the street and out of institutions and government offices. As Max Weber wrote, representation is a “structure of domination,” and thus we maintain the revolution’s cry, “the people want the fall of the system.”
We are at a global turning point.
We must fight on."
Posted by Tony at 6:54 PM