Assad Vowed to "Retaliate" at the "Appropriate Time and Place,"........
The Same Empty Threats of the Past 40 Years! 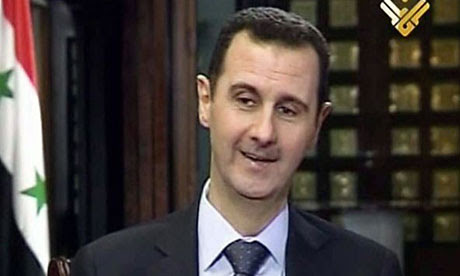 "LATAKIA, Syria, July 14 (UPI) -- Prime Minister Benyamin Netanyahu declined to comment Sunday on whether Israel was responsible for last week's explosions in Latakia, Syria.
"I am not in the habit of saying what we did do or didn't do," he told CBS' Bob Schieffer on "Face the Nation."
Netanyahu did say that he stands by his policy of preventing the transfer of dangerous weapons to the Hezbollah and other terror groups.
His comments come after an Israeli Dolphin class submarine allegedly attacked a Syrian arms depot at the Latakia port July 5, unnamed sources told Britain's The Sunday Times.

Citing Middle East intelligence sources, the Times reported the alleged Israeli navy strike was closely coordinated with the United States. The aim of the strike was to destroy about 50 Russian-made, Yakhont P-800 anti-ship missiles stored at the base, the newspaper said. The missiles had been shipped to Syria earlier in the year.

The Times report contradicted a CNN report Friday in which unnamed U.S. officials told the American broadcaster Israeli fighter jets bombed the base. The officials told CNN Israel was concerned the Russian-made missiles posed a threat to its naval force......"