"CAIRO: Egypt's Christians have been targeted in a wave of attacks since the ouster of Islamist president Mohammed Mursi, and the state is failing to protect them, an NGO said Monday.
Sectarian violence since the latest political upheaval in Egypt began has killed four Coptic Christians in Luxor governorate, with churches elsewhere torched and looted, said the Egyptian Initiative for Personal Rights.
A Coptic man was also found decapitated on Thursday, five days after being kidnapped in the restive Sinai, where gunmen killed a Coptic priest the week earlier.
"What is disturbing is the failure of the security apparatus to act -- which at times looks like collusion -- to protect citizens and their property who are being targeted on the basis of their religion," the EIPR's Ishak Ibrahim said in a statement.
"Copts are paying the price of the inflammatory rhetoric against them coming from some Islamist leaders and supporters of the former president, who accuse Coptic spiritual leaders of conspiring to foment army intervention to remove Dr Mursi," he added.
In the worst violence cited by the rights group, in the two day's after Mursi's ouster, revenge attacks over the killing of a Muslim man in Al-Dabaiya, a town west of Luxor, left four Copts dead and several homes torched and looted, the NGO said.
It accused the police of taking no action to protect them or escort them from their homes, which were surrounded, despite the fact they repeatedly calls the security services for help.
The EIPR said it was troubled by the "disregard" of state institutions for these incidents and called on the interim authorities to take swift action to protect Egyptians and "end inflammatory campaigns targeting citizens on the basis of religion".
Sectarian tensions in Egypt have risen since an Islamist came to power for the first time in 2012, following the country's first free elections.
Egypt's Coptic Patriarch Tawadros II accused Mursi of "negligence" over his response to clashes outside Cairo's Coptic cathedral in which two people died and many were wounded.
The funeral service was for four Christians killed in a gun battle with Muslims in a town north of Cairo in which one Muslim also died." 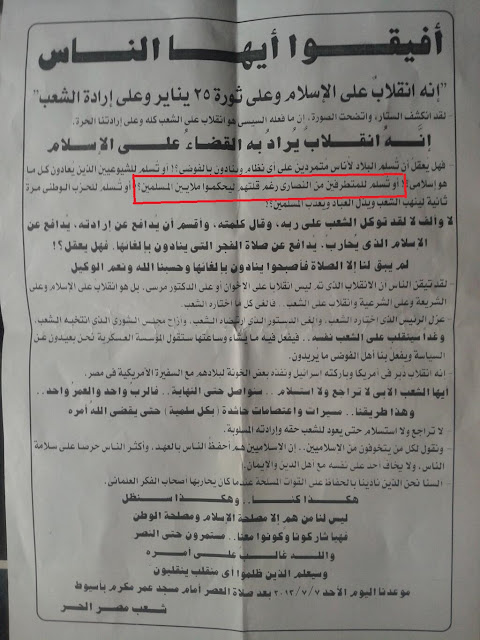 BECAUSE WORDS CAN KILL:
Members of Gamaat Islamiyya distributed leaflets inciting against Copts in Assiut.
Posted by Tony at 12:55 PM