Free the refugees of Nahr al-Bared 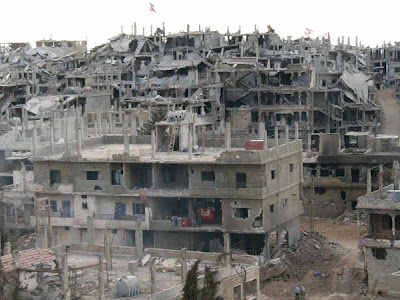 Residents of the Palestinian refugee camp in Lebanon have been trapped in a closed military zone for five years.

"Tripoli, Lebanon - Last week at a candlelight vigil in Baddawi refugee camp for the camp's dead and injured, signs posted on the school wall asked why, after five years, was Nahr al-Bared still a closed military zone?

For the past five years, all entrances to Nahr al-Bared have remained encircled by the Lebanese army. It has remained that way since the military's 2007 campaign - ostensibly against Fatah al-Islam members - devastated the camp, turning it into a closed military zone. In addition to the checkpoints, walls and barbed wire, the army commandeered all the homes surrounding the periphery of the camp, in addition to those homes straddling the border between the old and new sections of the camp.

Those wishing to visit friends in the camp must first obtain permission from the army (and those who are US citizens must wait for the army to clear visits with the US embassy). Palestinians from other camps, including those who lived in Nahr al-Bared prior to the army's bombardment, are also prevented from visiting the camp. Thus, people in other camps cannot visit their relatives in Nahr al-Bared without prior permission from the military.........

One wonders, for instance, why formerly armed fighters, identified as Fatah al-Islam members, were released from prison at the same time Palestinian prisoners were also released, and while Nahr al-Bared is resisting its besieged conditions. In the absence of journalists present to observe the sit-in - and the events leading up to it - the media is conflating ideas and making a scapegoating of an "Islamic militia" to justify the army's potential destruction of yet another Palestinian refugee camp in Lebanon. It foments jingoistic sentiments in the population, and, in Lebanon, it is the Palestinians in the camps who suffer accordingly.

Falling victim to these conspiracy theories about Fatah al-Islam, or any other militia foreign to the camp, misses the root of the problem. Palestinians are fed up with a besieged existence, and want the right to live and move about freely - both within and outside their camp.

What happened this week was no different from an uprising in a prison, with prisoners demanding their rights - except, in this case, the imprisoned are an innocent civilian population that has not been arrested or convicted of any crime. Palestinians are demanding basic human rights, demanding to live their lives with dignity. To spin it any other way is to perpetuate racism against the Palestinian people."
Posted by Tony at 3:46 AM