Syrian government loyalists 'may be responsible' for massacre – UN report 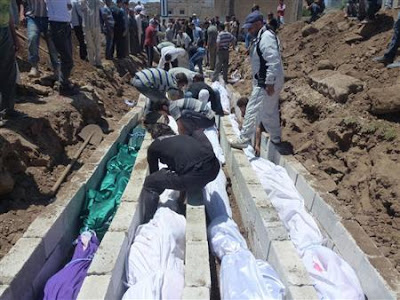 UN-appointed human rights experts say shabiha forces had better access to site in Houla, where more than 100 were killed

"A United Nations investigation into the killing of more than 100 civilians in the Syrian area of Houla last month says forces loyal to the government "may have been responsible" for many of the deaths.

A report by UN-appointed human rights experts says the military or pro-government shabiha forces had better access to the sites of the massacre in the Houla village, in Homs province, on May 24-25.

The village leans toward opposition support and most of the victims were women and children who were slaughtered in their homes......"
Posted by Tony at 6:52 AM