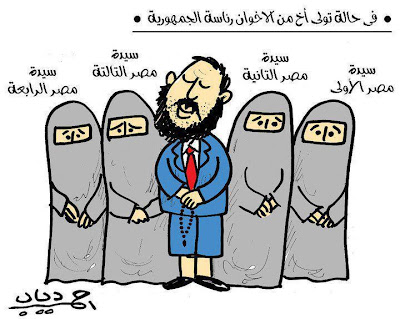 "......The secrets of behind-the-scenes bargaining between the Brotherhood and Scaf remain to be told. It will be surprising if the generals do not retain their financial clout and privileges, and their powers to make war, conduct foreign policy and maintain internal security – the holy trinity of Egypt's deep state. It will suit them perfectly to blame the civilian president for the parlous state of the economy.

In a curious twist of recent days, Shafiq supporters accused the US of quietly encouraging a Morsi win – as a way of cementing the dominance of Scaf and securing the strategically important peace treaty with Israel.....

Morsi's biggest challenges start now. Will he stand up to the army? His claim to represent "all Egyptians" will be tested by how he reaches out to the liberal and independent candidates who fell away in the first presidential round.

Who will he choose as a prime minister? A non-Brotherhood figure – Mohamed ElBaradei is being mooted – could signal pluralism and help deflect heat on the economy. Nervous Copts and women will need reassuring. Not everyone believes the Brotherhood's newfound spirit of inclusiveness: after all, it backed Scaf's transition plan for most of last year and then reneged on its own promises not to field too many candidates for parliament or any for the presidency.

Morsi's victory is not the end of Egypt's turbulent post-revolutionary game. But it is perhaps the end of the beginning."
Posted by Tony at 12:13 PM