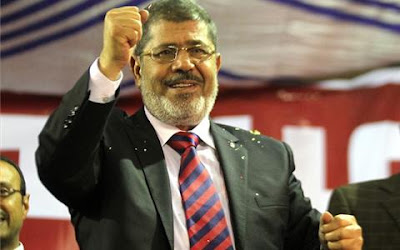 You Call This A Revolution??
Posted by Tony at 7:40 AM

Tony !! this is a first step. We are not going to go from decades of Tyranny to Switzerland. This the first step towards bigger things. Let's not minimize the fact that this is the first civilian elected to be a president in 7000 years of Egypt's history. As you know I am the farthest person from Religion but I have to respect the wish of the people and now let's see what they have to offer. Had they never been marginalized they would not have gotten from than 25% of the votes. Plus this is a vote against Mubarak era more than it is a vote for MB. If we accept the lesser of 2 evils in the US , then this is definitely the case in Egypt. Now we have an unknown territory to venture into and there is no precedence in order to speculate how the future will turn out. I am cautiously optimistic despite of all my reservation on the choice.

I wish I could share your optimism. I see Pakistan as the model being pursued for Egypt. The Empire will not let go, and the Brothers are pawns of both SCAF and the Empire.

Until the majority of the people see this for what it is, and stop celebrating an imaginary "victory," as Saad Zaghloul said: "There is no hope; Mafish Faidah!"