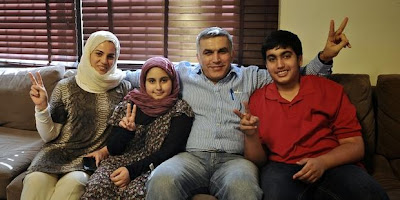 US Should Speak Out on Nabeel Rajab Conviction

"(Beirut) – Bahraini authorities should immediately release the human rights activist Nabeel Rajab and overturn his conviction for organizing and participating in “illegal” demonstrations, Human Rights Watch said today. His conviction is a violation of his right to freedom of assembly. Rajab is president of the Bahrain Center for Human Rights and a member of the advisory committee of the Human Rights Watch Middle East Division.

Rajab was sentenced on August 16, 2012, to three years in prison for his involvement in three demonstrations between January and March 2012. Defense lawyers told Human Rights Watch that the judge issued the sentence before they could get to the hearing from a hearing in another case involving Rajab in another court. Rajab was taken to prison before he was able to meet with lawyers or his wife and children.

“This ruling shows that Bahrain’s rulers are committed to a policy of comprehensive repression,” said Joe Stork, deputy Middle East director at Human Rights Watch. “Instead of releasing people jailed for peaceful dissent, it seems determined to lock up even more people who try to exercise their right to peaceful assembly and free expression.”......"