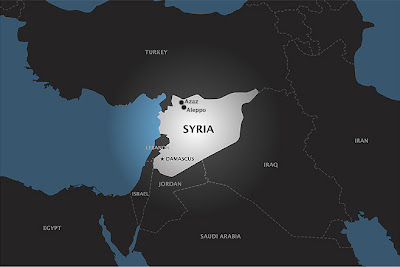 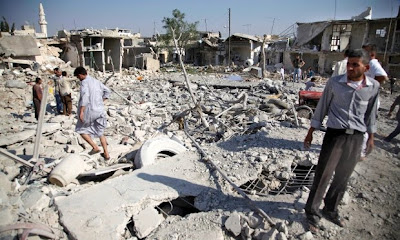 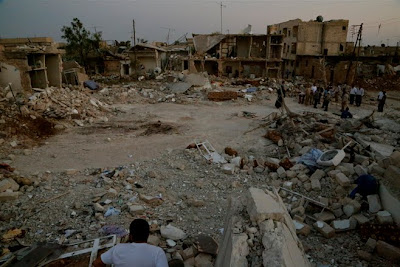 More than 100 Wounded in Attack on Azaz, Near Turkish Border

"(Azaz) – A Syrian government fighter jet bombed a residential neighborhood, killing more than 40 civilians and wounding at least 100 others in the town of Azaz, including many women and children, Human Rights Watch said today after visiting the town. In the attack on August 15, 2012, at least two bombs destroyed an entire block of houses in the al-Hara al-Kablie neighborhood of Azaz, in Syria’s northern Aleppo province.

Human Rights Watch investigated the site of the bombing two hours after the attack and interviewed witnesses, victims, medical personnel, and relatives of those killed.

Azaz residents told Human Rights Watch that, at around 3 p.m., they saw a fighter jet drop at least two bombs on the residential area. Within seconds, dozens of houses in an area of approximately 70-by-70 meters – more than half a football field – were flattened. Houses on the surrounding streets were significantly damaged, with collapsed walls and ceilings. On the streets around the bombed area, windows were broken and some walls had collapsed.

Two opposition Free Syrian Army facilities in the vicinity of the attack might have been targets of the Syrian aircraft, Human Rights Watch said. One was the headquarters of the local Free Syrian Army brigade, in the former building of the Baath party, two streets away from the block that was hit. The other was a detention facility where the Free Syrian Army held “security detainees” – government military personnel and members of pro-government shabeeha militia. Neither of these facilities was damaged in the attack......"