Egypt’s shooting of an elephant 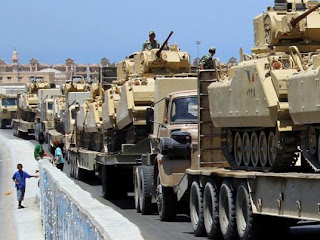 "In a span of 10 days, militants killed 16 Egyptian guards near the Israeli border, Amr al-Bunni died trying to collect his wages from Nile City Towers, and Moaz Mohamed lost his life to a burnt shirt in Dahshur. In Egypt today, tragedy and farce are two faces of one coin.

Intertwined within each of these deaths are layers of tragedy and decades of injustice. Yet all of this is lost in the noise of polarized perspectives and historical amnesia. So when Egyptian soldiers on duty near the Israeli border were attacked and killed in a shadowy, suspicious incident in which the objectives of the assailants seem largely beyond logical comprehension, the distribution of blame was weighted in favor of the farcical.

If the attackers were Palestinian militants, then they would be acting in their disinterest by attacking their allies and jeopardizing relations with Egypt, losing the sympathy of Egyptians and blockading themselves as the border shut.

Even under Hosni Mubarak, arguably the most hostile Egyptian regime to the well-being of Palestinians in Gaza, no attack of this sort or scale had ever occurred. Why then is such an incident taking place during a time when Hamas Prime Minister Ismail Haniyeh is received as the president of Palestine by Mohamed Morsy?

And if it is not a Palestinian militia, then maybe it is Sinai’s Bedouins, whose “unfounded” anger, frustration and animosity toward the Egyptian state might have caused them to commit such a crime.

What do they have to complain about besides having their land annexed by the state, sold at comical prices to investors and developers, and then being locked out of employment and revenue-generating possibilities for two decades? Are they not content with their lives becoming global cliches, as tourists dress in their likeness and go on desert excursions to drink coffee under the stars to appreciate their prehistoric lifestyles? Surely they understand that the years of frequent and systematic arrest, interrogation and mistreatment of their kin are imperative in the name of national security...."
Posted by Tony at 4:15 AM