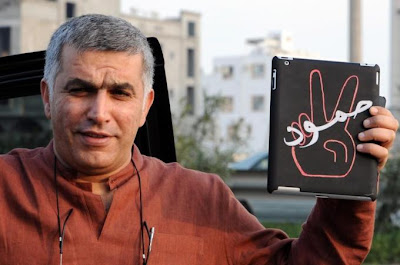 "A Bahrain court's decision to sentence a prominent human rights activist to three years in prison for taking part in an anti-government protest is a "dark day for justice" in the country Amnesty International said today.

Nabeel Rajab, the President of the Bahrain Centre for Human Rights, was found guilty of taking part in an “illegal gathering” among other charges in relation to a protest in the capital Manama on 6 February 2012.

Rajab, his family and one police guard were the only ones present at the Third Lower Criminal Court in Manama today when the judge read out the verdict.

Rajab is already serving a three-month sentence for libel in relation to a post he made on Twitter.

"The court's decision is a dark day for justice in Bahrain that further questions the independence of the judiciary," said Hassiba Hadj Sahraoui, Deputy Middle East and North Africa Programme Director at Amnesty International.

"Like many others in Bahrain, Nabeel Rajab is a prisoner of conscience, jailed solely for peacefully exercising his right to freedom of expression and assembly. He should be released immediately and his convictions and sentences quashed. The authorities must also act to ensure that all human rights defenders are able to carry out their work without fear of reprisal."

“If anything, this latest verdict marks the end of the facade of reform in Bahrain. The international community can no longer be under the illusion that Bahrain is on the path of reform when such blatant ruthless tactics are being used to suppress dissenting voices. Bahrain’s international partners need to make this loud and clear to the Bahraini authorities”

According to his lawyers Rajab was found guilty of three charges – "gathering with the intention of disrupting security", "calling for marches or protests without a permit" and "participating in a protest without permit". Each charge related to one of three different protests he took part in during the first three months of 2012....."