Exclusive: Deputy PM says neither side is strong enough to win and government may call for ceasefire at Geneva talks 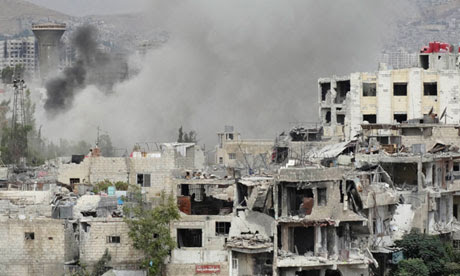 AS THE BUTCHER HAS PROMISED, "ASSAD OR WE WILL BURN THE COUNTRY!" PROMISE KEPT!
"The Syrian conflict has reached a stalemate and President Bashar al-Assad's government will call for a ceasefire at a long-delayed conference in Geneva on the state's future, the country's deputy prime minister has said in an interview with the Guardian.

Qadri Jamil said that neither side was strong enough to win the conflict [What happened to the repeated assertions by the butcher Assad that victory was just around the corner? Even with the help of Hizbullah and other sectarian Shi'a militias from Iraq and "advisers" from Iran, he now wants a cease fire? I would not trust the bastard one bit], which has lasted two years and caused the death of more than 100,000 people. Jamil, who is in charge of country's finances, also said that the Syrian economy had suffered catastrophic losses.

"Neither the armed opposition nor the regime is capable of defeating the other side," he said. "This zero balance of forces will not change for a while."