Have the Egyptians Gone Crazy?? Egypt: Frenchman dies in police custody amid rising tide of xenophobia 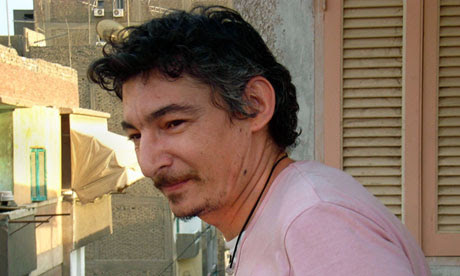 Eric Lang, a French national living in Egypt, was beaten to death by inmates in a Cairo police station. Photograph: Alain Blotti Re/AP

"A French national has died in police custody in Cairo and two Canadians have begun a hunger strike to protest at their month-long detention amid a rising tide of xenophobia and nationalist fervour in Egypt.
Elsewhere, two Syrian refugees were killed by Egyptian coastguards while trying to flee the country by boat, while a Swiss national has been arrested on suspicion of espionage after being caught in possession of a toy plane.
Frenchman Eric Lang, 49, a teacher, was beaten to death by fellow inmates in a Cairo police station last Friday. A longterm Cairo resident, Lang had been held by the police since 6 September after failing to produce valid residency papers. Initial reports suggested Lang was arrested for flouting Cairo's curfew, which has been in place since the brutal killing of up to a thousand supporters of the ousted president Mohamed Morsi on 14 August sparked a wave of unrest across Egypt, but his family's lawyer said that he was arrested during the day.
News of Lang's murder came as two Canadians announced a hunger strike to protest against their continued incarceration without charge in an Egyptian prison. John Greyson, a renowned Canadian documentary film-maker, and his companion Tarek Loubani, a doctor, were arrested during the unrest in Cairo on 15 August after asking at a police station for directions, according to friends.
Shortly afterwards, they called a colleague in Canada. "They said: we're being arrested," Greyson's sister Cecilia said. "And then the line went dead."
The pair were on their way to Gaza, where Loubani planned to teach local doctors in a training programme that Greyson had wanted to document on camera. Instead, they have spent 33 days in jail without charge, much of it in a cramped cell containing 36 other inmates, Cecilia Greyson said.
The pair's situation has become a cause célèbre overseas, and Alec Baldwin, Arundhati Roy, Ben Affleck, Charlize Theron and Michael Ondaatje are among 135,000 to have signed a petition calling for their release.
While the precise circumstances surrounding their and Lang's arrests are unknown, their treatment follows a spike in xenophobia and nationalism in Egypt that was provoked by the overthrow of Morsi in early July.
Suspicion of foreigners is by no means unprecedented in Egypt, but it has heightened this summer as Egypt's new government and its backers across state and private media began to demonise Morsi and his allies as anti-Egyptian terrorists backed by an unlikely range of foreigners, from Hamas to Barack Obama.
Prosecutors accuse Morsi of colluding with Hamas during Egypt's 2011 uprising, in charges that paint Morsi and his Muslim Brotherhood as foreign interlopers who act without Egypt's national interests at heart. In a similar vein, Egypt's flagship state newspaper, al-Ahram, has run front-page stories claiming that Morsi's Brotherhood were plotting with the US to divide up Egypt. One private newspaper even claimed that Obama was himself a member of the Brotherhood.
Some television chatshow hosts have fanned the flames on a nightly basis, vilifying western governments and journalists for failing to give wholesale approval to the army's removal of Morsi, which had widespread public approval within Egypt's borders.
"America and Britain have a plan to pay the Muslim Brotherhood so that the country will be divided – one piece to Palestine, another to Libya and another to the Christians, so that we'll have a war for 50 years," Salah Zeyada, a governor of a province in central Egypt, said last week, expressing a commonly held sentiment.
A British resident in Cairo for nearly three decades, Cathy Costain said she had never personally experienced xenophobia since arriving in 1986, now or in the past. But she said that anger towards foreigners from some television hosts is now "way beyond anything I've seen before", and added that the treatment of Lang, Greyson and Loubani was unusual.
"The teacher who's died, and the journalists who are in prison – it used to be that the authorities would try to make the problem go away as quickly as possible," said Costain, a charity worker. "But it seems like they are trying to make an example of them – which is quite scary."...."

"America and Britain have a plan to pay the Muslim Brotherhood so that the country will be divided – one piece to Palestine, another to Libya and another to the Christians, so that we'll have a war for 50 years," Salah Zeyada, a governor of a province in central Egypt, said last week, expressing a commonly held sentiment.

That's the stupidest thing ever. How can anyone believe that?