Bandar Bush is Throwing a Tantrum: Saudi Arabia set for diplomatic shift away from US

Intelligence chief tells diplomats he plans to limit interaction with US in protest at its policies on Syria, Israel and Iran 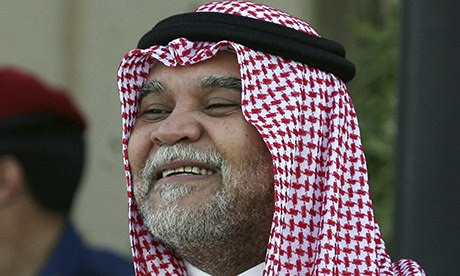 "Saudi Arabia's intelligence chief has said the kingdom will make a "major shift" in dealings with the United States in protest at its perceived inaction over the Syria war and its overtures to Iran, a source close to Saudi policy said on Tuesday.
Prince Bandar bin Sultan told European diplomats that Washington had failed to act effectively on the Syria crisis and the Israeli-Palestinian conflict, was growing closer to Tehran and had failed to back Saudi support for Bahrain when it crushed an anti-government revolt in 2011, the source said.
It was not immediately clear whether Prince Bandar's reported statements had the full backing of King Abdullah.
"The shift away from the US is a major one[Sure Mr. Bush! Tell us some more!]," the source said. "Saudi doesn't want to find itself any longer in a situation where it is dependent.
"Prince Bandar told diplomats that he plans to limit interaction with the US. This happens after the US failed to take any effective action on Syria and Palestine. Relations with the US have been deteriorating for a while, as Saudi feels that the US is growing closer with Iran and the US also failed to support Saudi during the Bahrain uprising."
The source declined to provide more details of Bandar's talks with the diplomats, which took place in the past few days. But he suggested that the planned change in relations would have wide-ranging consequences, including on arms purchases and oil sales."
Posted by Tony at 6:52 AM