Four people, including an eight-year-old girl, killed in suspected sectarian attack on minority which makes up 10% of population 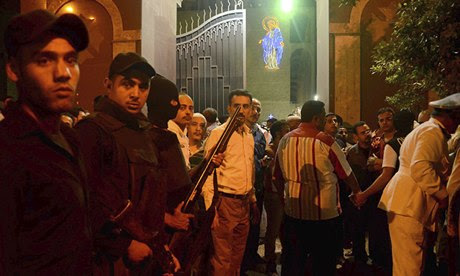 "Gunmen shot dead at least four Egyptians outside a Coptic Christian church on the edge of Cairo on Sunday evening as worshippers left the building after a wedding, state media reported. Two adults and two girls aged eight and 12 were killed, and at least 12 others injured, after the gunmen sprayed bullets seemingly at random.
The perpetrators, and their motives, are unknown as they left the area quickly on motorcycles, according to witnesses. But there are strong concerns that the shootings mark the latest sectarian attack on Egypt's Coptic Christian minority, which makes up around 10% of Egypt's population of 85 million.
Copts were scapegoated by some Islamist hardliners for the July overthrow of ex-president Mohamed Morsi – over 40 churches were attacked following the brutal army-led clearance of two pro-Morsi protest camps in August. State officials have done little to prevent the attacks, or bring their instigators to justice, although Egypt's prime minister called Sunday's attack a "callous and criminal act" and pledged to prosecute those responsible.
The Muslim Brotherhood – the Islamist group to which Morsi belongs – also strongly condemned the most recent attack in an English-language statement released overnight, while their allies have frequently blamed assaults on Christians on unaffiliated criminals, or even the state itself. But their opponents argue that some Islamists at the very least incited the violence with sectarian speeches made during pro-Morsi protests this summer, and in their Arabic-language websites.
This weekend's killings constitute the latest outburst of the widespread violence that has characterised Egypt's summer. Over a thousand Morsi supporters have been killed by security officials since his removal in July, while dozens of soldiers and policemen have been killed in a series of revenge attacks by Islamist extremists, largely in the northern Sinai peninsula. Earlier on Sunday the campus of al-Azhar, Egypt's oldest university, was the site of skirmishes between pro-Morsi students and riot police.
Egypt is currently polarised between a sizable minority of Islamists furious at Morsi's overthrow and the crackdown on his supporters – and a larger group of Egyptians who have given wholesale backing to the army that ousted him. A small minority refuse the authoritarianism of both groups; they are glad to see Morsi leave but fearful that the army-backed government heralds the return of counter-revolutionary, Mubarak-era governance.
The latter group is currently alarmed about new legislation that may severely stifle street protest, after Egypt's interim cabinet drafted a new law that would significantly curtail demonstrators' rights to free assembly.
"Why are these people deciding what's best for us?" asked Mohamed Hashem, a publisher and leading light of Egypt's revolutionaries who has threatened to leave the country in despair at recent events. "Did all the martyrs sacrifice their souls for nothing?"
But other Egyptians may not be so upset, with many yearning for a return to stability following nearly three years of turmoil, and hoping for an end to the almost daily pro-Morsi protests."
Posted by Tony at 6:45 AM