US strikes in Yemen have killed dozens of civilians, says report 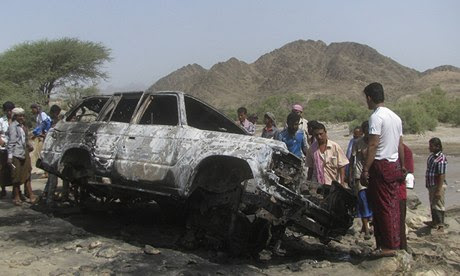 People gather at the site of a drone strike in southern Yemen. Photograph: Stringer/REUTERS

"US missile strikes, including armed drone attacks, have killed dozens of civilians in Yemen as the United States tries to crack down on al-Qaida in the country, a prominent human rights organisation said on Tuesday.
Human Rights Watch detailed in a 96-page report what it said were six "unacknowledged" US military attacks on targets in Yemen, which either clearly, or possibly, violated international law.
Eighty-two people, 57 of whom were civilians, were killed during the six attacks studied by the group. One of the incidents occurred in 2009 and the other five happened in 2012-2013.
The Human Rights Watch report came as Amnesty International issued a report on US drone strikes in Pakistan.

Two strikes in Yemen - one in September 2012 and the other in December 2009 - caused what Human Rights Watch said were the largest numbers of civilian casualties.
On 2 September 2012, as two US drones flew above the target area, either two additional drones or two warplanes attacked a vehicle travelling north from the central Yemeni city of Radaa.
That attack killed 12 passengers in the vehicle, including three children and a pregnant woman, in violation of a law of war prohibiting attacks that do not discriminate between civilians and combatants, Human Rights Watch said.
The group said the apparent target of the raid was a tribal leader named Abd al-Raouf al-Dahab. He was not in the vehicle when it was attacked and that it was not clear that he was a member of al-Qaida's Yemeni affiliate, known as al-Qaida in the Arabian Peninsula.
Of the six cases it studied, Human Rights Watch said at least four of the strikes were carried out by missile-firing drones. A fifth was carried out either by drones or planes, and the sixth by cruise missiles that the group said released cluster bombs.
On 17 December 2009, an attack by as many as five US navy cruise missiles struck a Yemeni hamlet, killing what the Yemeni government initially described as 34 terrorists at a training camp.
However, Human Rights Watch said a Yemeni government inquiry later established that although 14 fighters for al-Qaida's Yemeni affiliate were killed in the attack, so were at least 41 civilians, including nine women and 21 children.
Posted by Tony at 1:02 AM