They cry, pray to Bush and wash out the devil - welcome to Jesus Camp 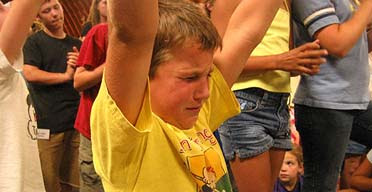 "The children at the Kids on Fire summer camp are intent as they pray over a cardboard cutout of President George Bush. They raise their hands in the air and sway, eyes closed, as they join the chant for "righteous judges". Tears stream down their faces as they are told that they are "phonies" and "hypocrites" and must wash their hands in bottled water to drive out the devil.
The documentary film Jesus Camp follows three children at the Kids on Fire Pentecostal summer camp in the small city of Devil's Lake, North Dakota.

After a television news report about the film became a hit on YouTube.com, it attracted media attention across the country and opens in Los Angeles today.

Some critics say that the often raw approach used by the camp's founder, Pastor Becky Fischer, as she prepares the children for "war", is too "scary". Others accuse the documentary makers of distorting Pastor Fischer's message.

At one point Pastor Fischer equates the preparation she is giving children with the training of terrorists in the Middle East. "I want to see young people who are as committed to the cause of Jesus Christ as the young people are to the cause of Islam," she tells the camera. "I want to see them radically laying down their lives for the gospel, as they are over in Pakistan and Israel and Palestine.""

THE "CHRISTIAN" TALIBAN ARE HERE!
Posted by Tony at 3:24 PM