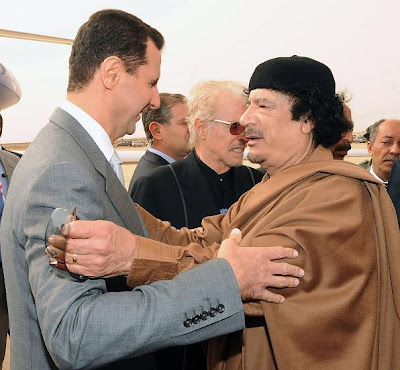 Gaddafi: You Are Next; See You in Hell.

"Syrian President Bashar al-Assad will use chemical weapons against opposition forces and may have already deployed them, Nawaf Fares, the first Syrian ambassador to defect, told the BBC on Monday.

Fares, the most prominent politician to defect since the uprising against Assad began, insisted that the president's days were numbered but warned he would be prepared "to eradicate the entire Syrian people" to remain in power.

When asked by the BBC's Frank Gardner whether that would mean the use of chemical weapons, Fares said: "I am convinced that if Bashar al-Assad's regime is further cornered by the people -- he would use such weapons."

"There is information, unconfirmed information, that chemical weapons have been used in Homs," the former ambassador to Iraq added....."
Posted by Tony at 7:17 AM

Djazaïri said...
This comment has been removed by a blog administrator.
9:45 AM

joe anon 1 said...
This comment has been removed by a blog administrator.
9:51 AM