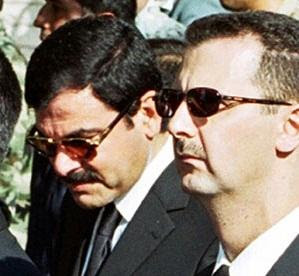 "Syria's uprising has entered a dramatic new phase after rebels fighting the regime of Bashar al-Assad killed the chief architect of the 16-month crackdown and the defence minister in a devastating bomb attack in the heart of Damascus.

Syrian state TV confirmed the death of Assef Shawkat, Assad's brother-in-law and the deputy head of the armed forces, and his closest security adviser, as well as Daud Rajha, the minister of defence and the regime's most senior Christian figure. Several others, including the interior minister, Mohammed Shaar, were wounded.

Explosions were also reported from the headquarters of the army's 4th division in Damascus – the regime's elite unit commanded by Assad's brother Maher.

The attack was a deadly blow to the heart of the regime after two recent high-level defections – by a senior Republican Guard commander and Syria's ambassador to Iraq....

Shawkat, married to Assad's sister Bushra, was one of the most feared figures in the president's inner circle and had won the support of the clan's influential matriarch, Anisa. He was one of three central figures in the regime crackdown, along with Assad himself and his brother Maher. As Syria's overall security chief, he had key input into all military and intelligence operations. He is known to have survived an attempt to poison him in late May when a cook contaminated food that had been prepared for him and key members of the national security ministry.

Abu Hamza of the Free Syrian Army told the Guardian at the time that rebel forces were trying to recruit aides of regime figures to carry out future attacks. "We have had some success with this," he said. "Some have been with us for a long time and have not yet been given orders to move."....

Shawkat had also been a key point-man with Iran and with Hezbollah. Since the uprising started he had chaired key strategy meetings and had driven the regime's uncompromising and aggressive military response to the escalating dissent.....

Pro-regime Syrians appeared shocked by the news. "A lot of pro-Assad people are really panicking," said an opposition activist. "Now they sound really nervous.""
Posted by Tony at 6:45 AM