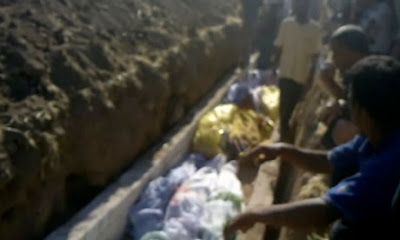 "....Residents said they fled their homes and as regime forces entered and said some of them were hunted down in nearby crop fields. "We don't understand why they attacked us," said a local woman, Umm Khaled. "We haven't brought harm to the region. All we've done here is hold demonstrations.

"I swear that we don't have any terrorists, Salafists, or anyone from the outside here. People have been terrified ever since [regime forces] came to the village in January and killed 40 of us. This time they stole from our homes, they robbed jewellery from women. All of this because we support the revolution?"

A second Tremseh resident, who wanted to be known only as Mohammed, said: "The bombardment started at 5.30am and ended at 2pm. The incursion started at midday from the north of the village. Shabiha and regime military men entered the village and occupied the roofs of high buildings and shot at anything moving.

"They shot many civilians in the head and then burned the bodies. They handcuffed civilians and then shot them in the head. They burned shops and houses with families inside. After what happened, the FSA [Free Syrian Army] members tried to get inside the village to help with burying the martyrs and tending to the wounded but they couldn't.

"The criminals took many martyrs' bodies and wounded civilians with them and there are many missing people and burnt dead bodies with no way to identify them."......"
Posted by Tony at 8:02 AM