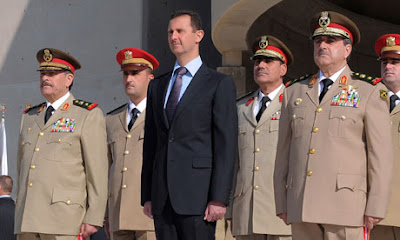 General Daoud Rajha is killed in suicide bomb attack on the National Security headquarters in Damascus.

Syria state television said that General Daoud Rajha was killed in Wednesday's suicide bomb attack and that several other participants in a top-level meeting who were wounded in the blast and were to Al-Shami hospital in the capital for treatment.

Al Jazeera's Rula Amin, reporting from Beirut ,said that It had been confirmed that the minister of defence, Daoud Rajha, had been killed, while the minister of interior and the head of the National Security office had been critically wounded.

Activists contacted by telephone reported an increased security presence around a hospital near the site of the reported explosion in northern Damascus, which they said indicated that senior officials had been wounded.

The explosion came as clashes beween the Syrian military and the Free Syrian Army in Damascus entered a fourth straight day....."
Posted by Tony at 3:55 AM