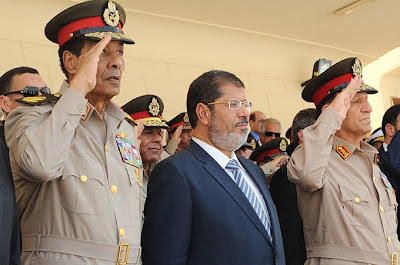 Pardon the Thousands, Including Children, Convicted in Such Trials

"(New York) – In one of the first real tests of the powers of the civilian president since the military “handover to civilian authority,” President Mohamed Morsy should pardon all those convicted by military courts. He should also order an immediate end to military trials of civilians and refer those against whom there is sound evidence of criminal activity to trial before civilian courts. On July 13, 2012, the committee that Morsy established to review cases of civilians sentenced by military courts recommended that the president pardon all of them.

According to the latest statistics given to committee members by the military, 2,165 civilians remain imprisoned after trials before military tribunals since January 28, 2011. In 2011, military courts tried over 12,000civilians, convicting at least 9,000, including hundreds of political activists, but most of the cases related to ordinary criminal activity. Military prosecutors have interrogated and detained at least 54 children from March 2011 to date, and have sentenced children with up to 15 years, Human Rights Watch research has found.

“International law is crystal clear on this – no civilian, regardless of the crime, should be tried by a military court. It doesn’t take a committee to confirm that,” said Sarah Leah Whitson, Middle East and North Africa director at Human Rights Watch. “President Morsy should take the principled human rights stance and pardon all civilians convicted by military tribunals.”......"
Posted by Tony at 7:47 AM