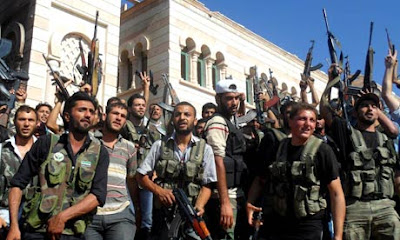 Activists posted video footage showing locals fleeing Aleppo in cars and minibuses early on Saturday, after the authorities warned they would shell rebel-controlled districts. Most of the fighting was raging in the Salaheddin part of the city, where FSA fighters were massing in large numbers, the activists said......

Israel, the region's most formidable power, meanwhile, announced it would consider military action to prevent Syria's chemical weapons and missiles arsenal from falling into the hands of Hezbollah, Assad's Shia Islamist allies in neighbouring Lebanon.

The defence minister, Ehud Barak, said:"I have instructed the military to increase its intelligence preparations and prepare what is needed so that … (if necessary) … we will be able to consider carrying out an operation.""
Posted by Tony at 9:35 AM