Americans would also gain from scaling back the empire 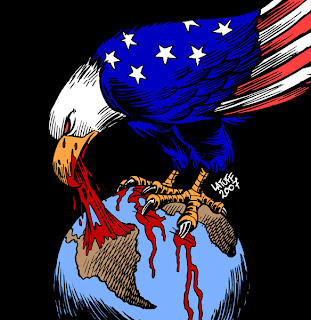 "Whoever runs Washington heads a global empire. American politics affects people's lives in every part of the world, often as a matter of life or death. So it's scarcely surprising that more than 40% of those polled around the world say they want the right to vote in US presidential elections.

After all, the American revolution was fought on the slogan of "no taxation without representation". So long as the US government arrogates to itself the right to impose its "leadership" by force across the world, a contemporary version of the colonists' demand might be: "no global power without accountability".....

Of course the rest of the world doesn't really want a vote in American elections but the US off its back. Far better for most Americans, too, if that bloated military budget were to be slashed, troops withdrawn and bases closed – and the money spent instead on jobs, schools and health in the US itself."