Compelling New Evidence of Use 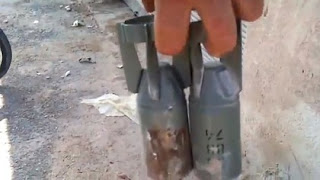 "(New York) – Mounting evidence shows that Syria’s air force is continuing to drop cluster bombs on towns across five governorates despite the Syrian army’s denial that it is using them, Human Rights Watch said today.  Data compiled by Human Rights Watch shows an important increase in the use of cluster bombs in the past two weeks. The cluster bomb strikes are part of an intensifying air campaign by government forces on rebel-held areas that has included dropping high explosive, fragmentation, and even improvised “barrel” bombs into populated areas.

Following an October 14, 2012 report by Human Rights Watch on Syria’s use of cluster bombs, Syria’s army issued a statement denying it was using cluster bombs and saying it did not possess such weapons. Since then, Human Rights Watch has gathered new evidence of ongoing cluster bomb attacks by Syria’s air force and has confirmed them through interviews with victims, other residents and activists who filmed the cluster munitions, as well as analysis of 64 videos and also photos showing weapon remnants of 10 new cluster bomb strikes in or near the towns of Salkeen and Kfar Takharim in the Northern governorate of Idlib; Eastern al-Buwayda, Talbiseh, Rastan, and Qusayr in Homs governorate; al-Bab in Aleppo governorate; al-Duwair and al-Salheya in Deir al-Zor governorate; and Eastern Ghouta, near Damascus.

“Syria’s denial is meaningless as evidence mounts that cluster bombs are raining down on towns and villages,” said Steve Goose, arms director at Human Rights Watch. “Syria’s air force is imposing a reign of terror on civilians in rebel-held areas across the country with cluster bombs and other explosive weapons dropped from aircraft.”........"