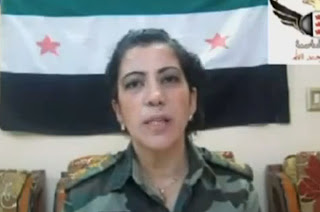 "In a revolution that has become associated with masculine bravado and gunfights in the streets, Zubaida al-Meeki stands out.

A former Syrian army general, she became the first woman officer to publicly announce her defection from President Bashar al-Assad's army after seeing what she describes as "crimes and atrocities committed by the regime".

An Alawite originally from the Occupied Golan Heights, bordering Israel, al-Meeki used to work in the army's recruitment division in Bibila, a town south of Damascus that was mostly seized by rebels in August after heavy fighting with regime forces.

Al-Meeki says she had planned to defect and join the Free Syrian Army (FSA) since October last year but was unable to do so because of constant surveillance imposed on army officers by the regime.
"When they suspected that I may defect, they stormed our house [and] broke the front door," she told Al Jazeera. "Then early in 2012, they fired my brother from his government job in the health administration in the city of Quneitra."

But after the FSA took control of major parts of Bibila, al-Meeki approached a checkpoint manned by opposition forces and told them she wanted to join the fight against Assad's regime......
Posted by Tony at 7:07 AM