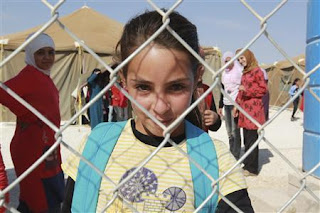 "(Reuters) - Lebanon has become the third of Syria's neighbors after Turkey and Jordan to register more than 100,000 refugees from Syria's civil war, the U.N. refugee agency said on Tuesday.

In all, more than 358,000 Syrians fleeing the 19-month-old conflict have registered in four neighboring states, including Iraq, and tens of thousands more have fled but not sought international assistance, it said.

Lebanon has seen its own Syrian-related unrest, exacerbated by the assassination last week of a senior intelligence officer who had pursued evidence of Syrian attempts to destabilize Lebanon.
"In Lebanon, we have not seen, despite the recent turmoil, a decrease in people crossing," UNHCR chief spokeswoman Melissa Fleming told a news briefing in Geneva.