Two-thirds say Palestinians should not be allowed to vote if West Bank was annexed, while three in four favour segregated roads 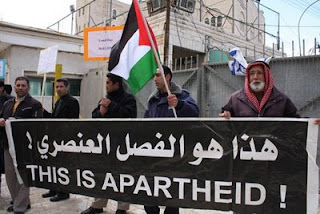 "More than two-thirds of Israeli Jews say that 2.5 million Palestinians living in the West Bank should be denied the right to vote if the area was annexed by Israel, in effect endorsing an apartheid state, according to an opinion poll reported in Haaretz.

Three out of four are in favour of segregated roads for Israelis and Palestinians in the West Bank, and 58% believe Israel already practises apartheid against Palestinians, the poll found.

A third want Arab citizens within Israel to be banned from voting in elections to the country's parliament. Almost six out of 10 say Jews should be given preference to Arabs in government jobs, 49% say Jewish citizens should be treated better than Arabs, 42% would not want to live in the same building as Arabs and the same number do not want their children going to school with Arabs.

A commentary by Gideon Levy, which accompanied the results of the poll, described the findings as disturbing. "Israelis themselves … are openly, shamelessly and guiltlessly defining themselves as nationalistic racists," he wrote......."
Posted by Tony at 1:53 PM