By Jonathan Cook
The Electronic Intifada 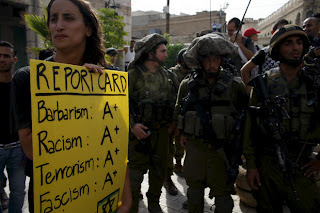 "A sustained battle by the Israeli right to stifle academic freedom at the country’s universities is close to claiming its first major scalp.

In an unprecedented move last month, officials from Israel’s Council for Higher Education (CHE) — a government-appointed body overseeing universities and colleges — recommended the effective closure of the politics department of Ben Gurion University, based in the Negev/Naqab city of Beersheva.
Unless a rearguard action is successful by the university to mobilize protests from overseas academics, a meeting of the full CHE later this month is expected to rubber-stamp the decision to cancel the department’s enrollment of students for next year.

The threatened closure comes in the wake of a series of repressive measures sanctioned by the hardline right-wing government of Benjamin Netanyahu to intimidate or silence domestic criticism, from human rights groups to the media and judiciary....."
Posted by Tony at 6:55 AM