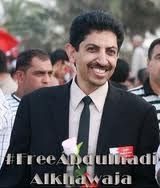 Amnesty International considers Abdulhadi Al-Khawaja and other Bahrain rights activists held in prison “to be prisoners of conscience, held solely for peacefully exercising their rights to freedom of expression and assembly” and has called for their immediate, unconditional release.
Maryam Al-Khawaja was scheduled to speak in her father’s place at the 13th Annual UNESCO Chair & Institute of Comparative Human Rights Conference at the University of Connecticut on 23 October, titled “Legacies Of Human Rights Leadership And Struggles.”

“Whilst I am honored that you chose my father, I am also utterly disappointed that you would honor him alongside a person who has been responsible for many human rights violations and should be put on trial, not honored,” Al-Khawaja wrote in an open letter to UNESCO, in her personal capacity, announcing her withdrawal. Al-Khawaja sent a copy of the letter to The Electronic Intifada......"
Posted by Tony at 6:46 AM