Syria bombing is a blast against social harmony


My old Damascus neighbourhood, the lively district of Bab Touma, brings together people from all faiths – it is that community spirit which Bashar al-Assad is trying to destroy 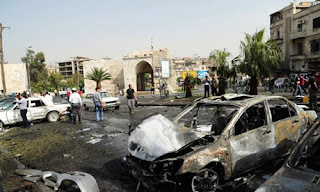 "When I heard that Bab Touma in Damascus had been bombed last Sunday morning, my first thought was how many people in my old neighbourhood I would have known, at least by sight, as they poured out of mass or went about their shopping. In a community so tight, where all of life is conducted within a few dense streets, it was inevitable. The police station – apparently the bomb's target – was where I registered my son's birth when I brought him home from the French hospital down the road. Our family doctor might well have been having his watch mended at the Armenian shop next door, and our local Aramaic-speaking baker, who baked communion bread for the quarter's churches, could have been riding his rusty bike home over the Roman bridge across the square when disaster struck.

Bab Touma Street is the heart of Damascus's Christian quarter, but it also encapsulates the essence of Syria and all that Syrians could be proud of, at least until last year, when words such as "sectarian" first began to rear their ugly heads. The busy, cobbled thoroughfare runs from Bab Touma (which means the Gate of St Thomas), to the street called Straight, a road mentioned in the Bible, and boasts two mosques and three churches (Maronite, Roman Catholic and Syrian Orthodox) on its 300m stretch. Its bakeries are owned by Shia families, Druze ladies sell homemade white cheese and herbs on the narrow pavements between the Greek Catholic florist and the Armenian photography shop, and the popular juice bar is run by Brylcreemed Kurds. Bab Touma street was where everyone rubbed along, as they visited its many hairdressers, shopped for hardware, lace mantillas, spices or underwear. It is, or at least was, the centre of Damascus's restaurant scene and nightlife, and the crowds that flocked there on Thursday evenings – the beginning of the weekend – would always surprise anyone who had previously doubted that hijabs, skinny jeans, skimpy Lycra and heavy makeup could coexist on one girl in the so-called conservative Middle East. Muslims come to Bab Touma for the lively restaurant scene, but it is also not unusual to see women in hijabs tending to the Virgin Mary shrines at street corners.
Of course, no Syrian I knew found it odd that the Greek Catholic florist, Jihad, had that surprising name. None of my neighbours thought it strange that the Shia owner of the bakery, famous for his thyme-filled croissants and lurid baptism cakes, should have the Virgin Mary tattooed on to his forearm, nor that in the summer of 2006, the Christian quarter's cake shops should sell large yellow and green Hizbollah flag-cakes in solidarity for the Lebanese victims of Israeli bombing. It was totally normal that school children of all faiths sported rucksacks with the face of Muntazer al-Zaidi, the Iraqi "George Bush shoe-thrower" and pan-Arab hero. My best Christmas decorations were bought in the shade of the Umayyad mosque just down the road in the souq. Days before my son's baptism, I was cheerfully told that he was a Jew – like St Paul, another local, you were Jewish until christened.
It has long been said of Syria that this unselfconscious harmony makes it a paragon in the Middle East. And yet, this harmony is precisely what one man, Bashar al-Assad, along with a handful of family members, is bent on trying to destroy."
Posted by Tony at 4:23 AM