Egyptian doctors 'ordered to operate on protesters without anaesthetic'

Exclusive: Leaked presidential report recommends an investigation into the highest echelons of the army leadership 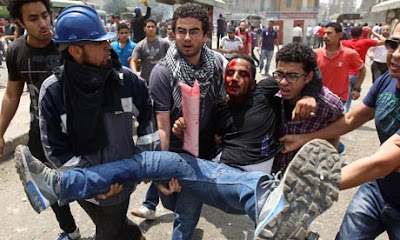 "Senior Egyptian army doctors were ordered to operate without anaesthetic on wounded protesters at a military hospital in Cairo during protests against military rule, according to an investigation commissioned by president Mohamed Morsi. The report into military and police malpractice since 2011 also alleges that doctors, soldiers and medics assaulted protesters inside the hospital.

The findings, which relate to the army's behaviour during the Abbassiya clashes in May 2012, are the latest leak to the Guardian of a suppressed report investigating human rights abuses in Egypt since the start of the 2011 uprising that toppled Hosni Mubarak. Earlier leaks alleged that the military were involved in torture, killings and forced disappearances during the uprising.

The new chapter contains testimony from doctors and protesters about the treatment of injured demonstrators at the Kobri el-Qoba military hospital in Cairo in May 2012.