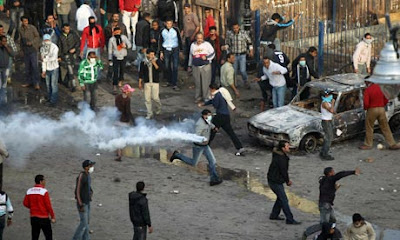 " Senior interior ministry officials sanctioned the use of live ammunition against protesters in Suez during the opening days of Egypt's revolution, according to a leaked fact-finding report commissioned by the president.

Under the watch of the interior ministry's most senior representative in the region, police fired indiscriminately at crowds from the roof of a police station, according to the report, and senior police officers allowed their deputies to remove weaponry from official stores without presenting identification. The report also describes how a military officer ordered plainclothes police to carry firearms through the streets even after police had been officially evacuated from the city.

These are the latest revelations from a tranche of a report commissioned by the president, Mohamed Morsi, that has been leaked to the Guardian. The new material covers the events of January and early February 2011 in Suez, the first large city to hold major protests against the rule of the then president, Hosni Mubarak.
Earlier leaks documented allegations that the military were involved in torture, killings and forced disappearances during the uprising......."
Posted by Tony at 4:41 PM