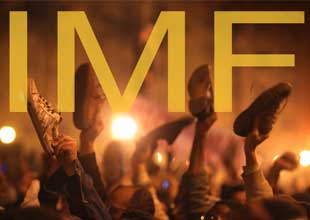 "Prominent political opposition figures and economic experts weighed in on Egypt's economic future at a Sunday conference organised by the opposition Popular Current movement in Cairo.

"This conference aims to provide effective, alternative solutions to improve Egypt's economic situation," Popular Current founder Hamdeen Sabbahi said in opening remarks at the conference, which was held under the banner 'Saving Egypt's economy: Towards an alternative programme.'
Speakers at the conference called for a larger government role in economic planning and activity and for abandoning Egypt's 'neo-liberal' agenda.

The veteran Nasserist opposition figure added that Egypt's current economic predicament, including high unemployment and public debt, were the result of erroneous policies adopted in order to meet the conditions of a proposed $4.8 billion IMF loan, which is sought by the government of President Mohamed Morsi.

Sabbahi was flanked by celebrated journalist and political commentator Mohamed Hassanein Heikal, who expressed his faith in Egypt's ability to surmount the current crisis. "Our history shows us that we can fulfil our hopes," Heikal said.

Other speakers, however, did not appear to share his optimism.
Former supply and domestic trade minister Gouda Abdel-Khaleq, for one, lamented what he sees as the absence of change in government thinking regarding the economy since the revolution........"

I am regular reader, how are you everybody? This piece of writing posted at this web site is actually pleasant.

Thank you for the good writeup. It in fact was a amusement account it.
Look advanced to more added agreeable from you! However,
how could we communicate?

Our Loan Services Include: