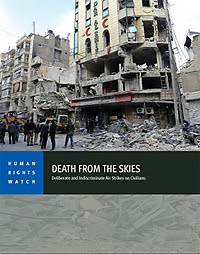 "(Aleppo) – The Syrian Air Force has repeatedly carried out indiscriminate, and in some cases deliberate, air strikes against civilians. These attacks are serious violations of international humanitarian law (the laws of war), and people who commit such violations with criminal intent are responsible for war crimes.

The 80-page report, “Death from the Skies: Deliberate and Indiscriminate Air Strikes on Civilians,” is based on visits to 50 sites of government air strikes in opposition-controlled areas in Aleppo, Idlib, and Latakia governorates, and more than 140 interviews with witnesses and victims. The air strikes Human Rights Watch documented killed at least 152 civilians. According to a network of local Syrian activists, air strikes have killed more than 4,300 civilians across Syria since July 2012.

“In village after village, we found a civilian population terrified by their country’s own air force,” said Ole Solvang, a Human Rights Watch emergencies researcher who visited the sites and interviewed many of the victims and witnesses. “These illegal air strikes killed and injured many civilians and sowed a path of destruction, fear, and displacement.”......"