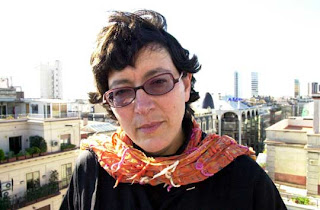 "A prominent Israeli journalist, Amira Hass, has been subjected to a wave of hate mail and calls for prosecution for incitement to violence since writing an article defending the throwing of stones by Palestinian youths at Israeli soldiers.

Hass, who has lived in and reported on the occupied Palestinian territories for 20 years, argued that "throwing stones is the birthright and duty of anyone subject to foreign rule", and suggested that Palestinian schools should offer "basic classes in resistance".

The opinion piece, published in the liberal Israeli daily Haaretz, for whom Hass works, drew outraged reaction on the internet and from media commentators. The Yesha Council, which represents settlers, and the Legal Forum for the Land of Israel filed complaints with the police and the Israeli attorney general, and demanded that Hass be investigated for incitement to violence and terrorism....."
Posted by Tony at 4:07 AM