Egypt's government must work for its people 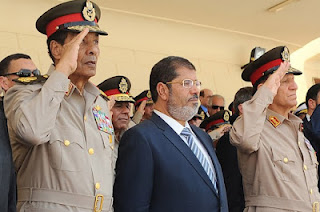 "The report leaked to the Guardian on the Egyptian military's dealings with protesters during and after the revolution has been sitting on the Egyptian president's desk since January.

Last May, when Morsi was making his case to be elected president for "all Egyptians", he promised to deal with the issue of what had happened to thousands of our young people during the previous year. The year when the Supreme Council of the Armed Forces (SCAF) was "protecting the revolution and overseeing the transition to democracy" – as they described it – had been a year of escalating massacres, trials, torture and disappearance......


An elected government, after a revolution, should be keen to put in place some form of transitional justice; to be seen caring for those who'd made sacrifices for the revolution. Instead, this government has gifted the army with a constitution that indemnifies it. And on the watch of this elected president more people have been killed, maimed, disappeared and tried than in the year of the military......"