Mourners at funeral for four Christians killed on Saturday attacked as they leave cathedral, while police stand by 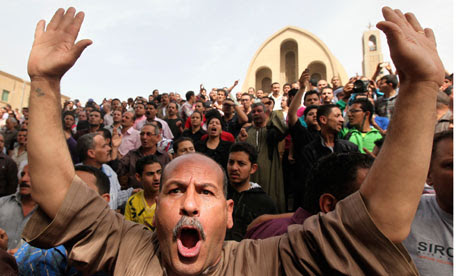 "Police and armed civilians have laid siege to the seat of the Coptic church in Cairo, killing one person and injuring at least 21, as a funeral for four Christians killed in sectarian clashes on Saturday descended into chaos.

Thousands of mourners were attacked as they tried to leave Egypt's largest cathedral, forcing them back inside the cathedral precinct and sparking a siege that lasted all afternoon and stretched into the night. Police fired teargas over the cathedral walls and stood by as unknown men armed with birdshot, knives and petrol bombs scaled nearby buildings to attack those inside the church grounds.

On Saturday, at least four Christians and one Muslim were killed in sectarian clashes that broke out north of Cairo after children allegedly drew a swastika on Islamic property. On Sunday Christians gathered in Cairo to remember the dead in a service that ended by further escalating sectarian tensions......"
Posted by Tony at 1:31 PM