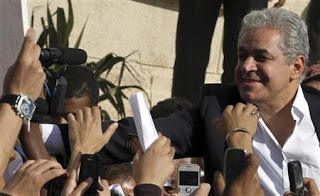 "(Reuters) - Popular Egyptian leftist politician and former presidential candidate Hamdeen Sabahy said on Saturday he is confident a coalition of leftist groups he is working to unite will be strong enough to defeat Islamists and win a parliament majority.

Sabahy, in an unexpected outcome, came in third place in the first round of the presidential vote last May, behind well-known army commander and politician Ahmed Shafik and current president Mohamed Mursi, who was the candidate of the state's most organized Muslim Brotherhood group.
Ten other candidates including two seen as front-runners trailed Sabahy, who had later turned down an offer by Mursi to become his vice president.

The almost-always smiling, populist succeeded in attracting millions of supporters moved by his promises to promote social justice, a fairer distribution of wealth and the elimination of poverty.

With a parliamentary vote expected before the end of the year, Sabahy is building on his gains from the presidential race and working to form a strong, organized bloc to run for parliament.

"We are seeking a national gathering of groups that share our goals of social justice but not necessarily our exact ideologies, and with that we will get a majority in parliament," Sabahy said in an interview with Reuters on Saturday night.

Sabahy said his front could include liberal groups and individuals who agree to his social justice program, but when asked if the front was also open to Islamists, the answer was an outright "no." "And certainly," he added, it "would not include the (Brotherhood's) Freedom and Justice Party and its allies."....."
Posted by Tony at 4:16 AM